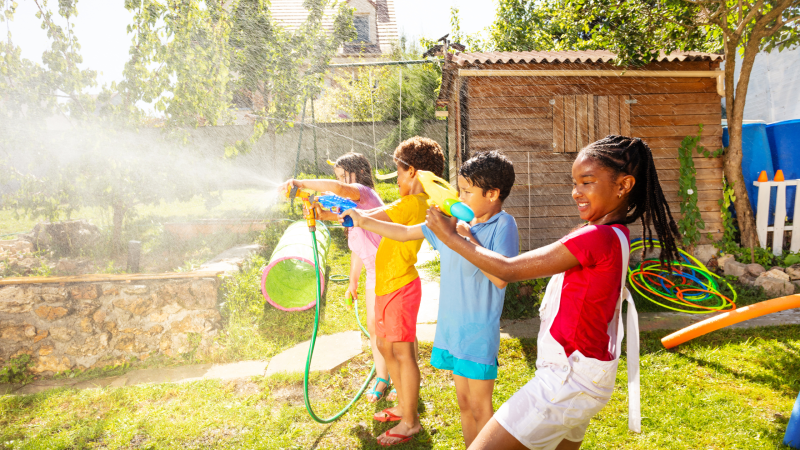 Only Satan could think of something as diabolical as a three-month summer vacation. It's a misnomer anyway. Vacation derives from vacate, which means empty. Most parents, on the other hand, would agree that summer vacation is completely full of it.

Full of squabbles with the kids, between the kids, over the kids, under the kids, and every which way but up the kids. Full of kids who want to stay up 'til midnight and sleep 'til noon and do nothing all day except complain of having nothing to do, but who don't want to do anything you suggest unless it's "Hey, kids, let's get in the car and go to Disney World!"

No wonder that by August you're on the brink of complete cerebral meltdown and contemplating such things as locking the kids out of the house or putting tranquilizers in their breakfast cereal.

Cheer up and read on. This could be your first summer of peace and quiet and calm, well-behaved children - all the things summer is supposed to be.

It's all in your head. Your attitude, that is.

If, like many parents, you approach summer with a bad - "All I can do is endure" - attitude, then be ready to endure, sufferingly. Enduring is for people who feel helpless to effect the course of their lives. Enduring is for wimps.

If you want to be a winner, you've got to act like a winner. Winners don't wait for things to happen; they make things happen. Winners take a proactive approach to problems, meaning they anticipate problems and plan to prevent them. So, if you want to keep your cool and beat the heat this summer, you'd better start proacting!

It's a fact of life, documented in many a study of human behavior, that lack of structure leads to stress. So, as a first step to keeping stress down and the summer-bummers at bay, try a little structure. After all, summer presents an ideal opportunity for parents to accomplish things with their children they might not be able, or have time, to accomplish during the hustle and bustle of the school year.

Start with getting the kids more involved in doing chores in and around the home. What? You have a maid? Fire her. You have children.

First, make a list of all the chores that constitute the regular housekeeping routine. Then check those chores the children are capable of doing. Keep in mind that any healthy child of 9 is capable of doing almost everything in the house and garden, save mowing the lawn, operating a tiller, cooking, washing clothes and ironing.

Divide a second sheet of paper into three columns, headed "What" "Who" and "When." Remember that "Why" is because you said so. Transfer the list of children's chores to the "What" column. Under "Who," assign a child to each chore. Decide the timetable for each chore and write that in under "When." As much as possible, group the chores into three blocks: first thing in the morning, right after lunch and right after supper. Not only is it easy to "capture" children at those times, but enforcement is less of a problem as well. I'll get to that in minute.

Make a seven-day calendar for each child, showing his chores day by day. A good rule of thumb is to assign at least an hour's worth of chores per child per day, divided into three periods of 20 to 30 minutes each. Teenagers can, and should, be expected to make more of a contribution than younger children. Now you're ready for the moment of truth. Sit down with the children and explain the system. They'll probably moan and groan and say dumb things like, "Do we have to?" and "You mean we're gonna have to work all summer?" and "I thought this was our vacation!" Answer "Yes" to all three.

Post the calendars on the refrigerator, give training where needed, make sure you inspect each child's work before releasing him to do his own thing, and watch the kids keep house.

Now that you've gotten the kids to do the housework, it's time for the next step in "Proacting the Summer-Bummers." Left to their own devices, many otherwise creative, active children will use the summer to perfect their couch-potato techniques. I'm talking television and electronics, the banes of childhood.

The problem is, the more children watch television and use electronics, the more bored and listless they become. The more bored and listless they become, the more they complain of having nothing to do and the more they drive their parents crazy. So, start by limiting their summertime television-watching to five hours a week. I do not recommend any electronic usage for young children, but if you must allow it limit their consumption to a set amount of time per day. A child who can't watch television or use electronics is a child who'll quickly start using the initiative, resourcefulness and imagination God gave him to invent creative ways of passing time. The more creative the child, the less complaining the child and the less crazy the parent.

For your next summer child-improvement project, how about cooling those constantly simmering sibling squabbles? No sweat! The secret to controlling sibling conflicts lies in making the children equally and completely responsible for the problem. In other words, mom and dad, you're going to have to learn to stay out of their little soap operas. Nothing fuels this particular family feud like a parent who decides to referee.

On a sheet of paper (yes, it's going on the refrigerator, too), draw a horizontal rectangle, divided into four boxes. Starting on the left, number the boxes four through one. Select three summer privileges (not rewards!) the children enjoy and put a privilege in each of boxes three through one. For example, you might put "playing outside" in box three, "having friends over" in box two and "staying up" in box one.

Show the chart to the kids and say, "Your bickering and arguing is disturbing the peace of the family. This chart is to help you learn to solve your differences quietly and without involving us. A new chart goes up on the refrigerator every day. Every time your bickering disturbs us, we will mark off a number, beginning with four.

"Number four is free, but boxes three through one have privileges written in them. When you lose one of these boxes, you lose the privilege that goes with it. For example, when you lose number three, you will both be confined to the house for the rest of the day. When you lose number two, you can't have friends over. When you lose number one, you go to bed early. New day, new chart and we start all over again. It's important you understand that from now on we're holding you both equally responsible for the bickering, no matter who started it or who did what to whom."

Once the chart is up, if they shatter your peace by yelling at one another or tattling, simply say, "Because you're not able to solve your problems without being loud or tattling, I'm taking off a number."

Suddenly, the children have cause for cooperation, and within a couple of weeks, you should notice a distinct change for the better. Regardless, keep the chart in force for several months, because it takes at least that long for behavioral changes to become permanent.

Just think, once you've got all three programs in force, the kids will be busy helping you with housework, watching less television, using less electronics, using their free time more creatively, complaining less, squabbling less and, believe it or not, enjoying their summer vacation a whole lot more. And so will you.